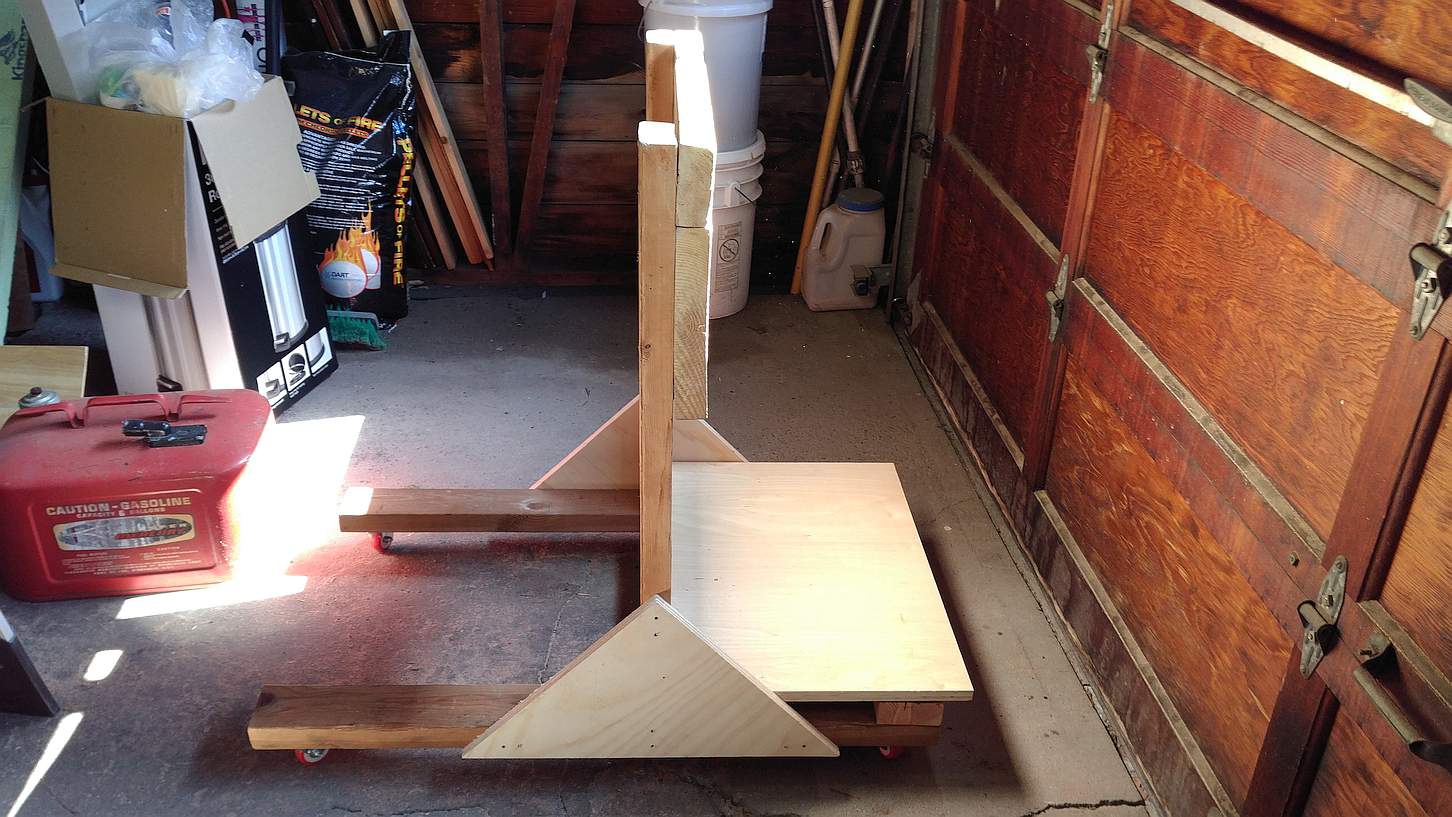 In Boat Trailer and Assorted Bits, I got my hands on an outboard motor while trying to obtain a serviceable trailer for my Tango Skiff project. The outboard may not work but I won’t know until I try so I set out to build a DIY outboard motor stand.

Based on my boat cradle experience, I was confident I could build something strong enough to handle the weight of the 50 hp Mercury outboard. And with plenty of scraps to choose from, I set to work.

I did some research and came across a few ideas. Several designs incline the stand’s uprights to mimic the transom angle but I didn’t see the need. These same designs also use cross braces for the uprights but I thought it was simpler to use 3/4″ plywood gussets instead. All the components are held together by a combination of structural screws and regular screws. Finally, 2″ locking casters make it mobile.

To prove my DIY outboard stand was strong enough, I turned it over on an angle, stood on top and bounced on it to try to separate the uprights from the base. There wasn’t so much as a creak. Despite this, I did go back and added a few structural screws to the gussets for more of a belt and suspenders approach. I wanted there to be no doubt about its strength.

And Now for a Hoist

The next thing was figuring out how to pull the outboard off. In keeping with this being a one person project, I had to do it myself. So I rigged this contraption to stand in for a gantry crane:

As you can see, it’s pretty simple – and yes it looks like a gallows. I used structural screws to connect the 4×4 and 2×4 pieces up top. The pulley system is a gambrel and hoist kit suspended from a heavy through bolt. The 4×4 is anchored into the outboard stand in a few places. The base of the 4×4 sits in a Simpson Strong Tie 12 gauge fence post base that’s screwed into the outboard stand’s base. I also used structural screws to tie the 4×4 into the stand’s upright. To make sure it was strong enough, I once again offered myself up to the boat building gods and performed a few pull-ups off the 2×4’s that would support the hoist. As before, things held up well.

The actual process of lifting the outboard onto the stand was relatively easy. However, if I should ever rig this up again, I’ll add temporary legs to the base to widen it. That way, I don’t have to be as concerned about possible instability if the outboard should start to swing as its being hoisted. Fortunately, the height of the transom and the stand matched well and the outboard only needed to be raised a few inches before it cleared.

Overall, it was a good experience even if I don’t end up using the outboard since there’s still the question of whether its operational. Regardless, the outboard stand is plenty stable and the motor had to come off at some point for testing.